Please subscribe to keep reading. You can cancel at any time.
Already a subscriber?
Log in or Activate your account.
Loading&hellp
No thanks, return to homepage.
You are the owner of this article.
Edit Article Add New Article
You have permission to edit this article.
Edit 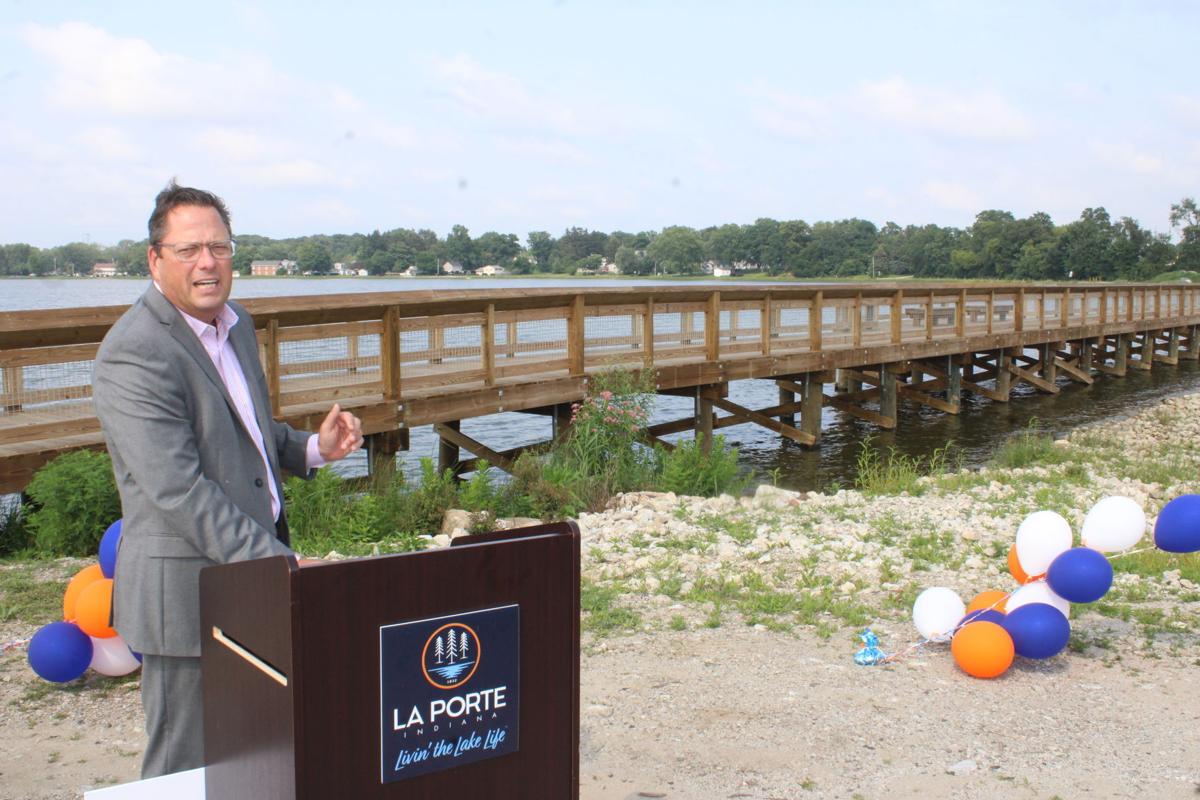 Mayor Tom Dermody said a trail extension around Clear Lake in LaPorte will add to the appeal of a new boardwalk along the southern edge of the shoreline. 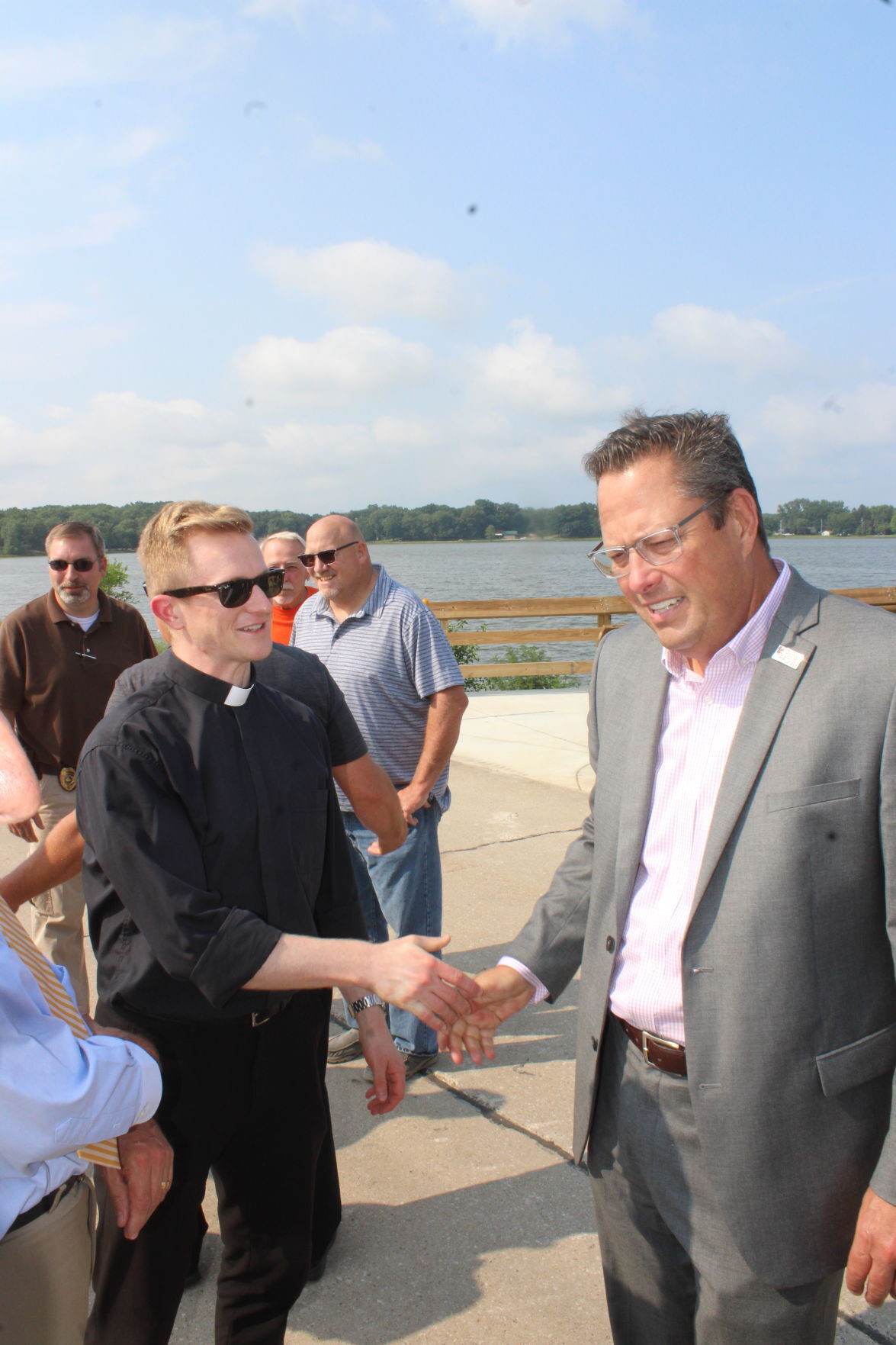 The Rev. Nate Edquist, a member of the Healthcare Foundation of LaPorte, and Mayor Tom Dermody shake hands after the foundation presented the city with a $2.2 check for extension of a trail around Clear Lake.

LAPORTE — Clear Lake is becoming a centerpiece in LaPorte, with an upcoming trail extension and other improvements to the shoreline.

The work scheduled to begin in October is the latest in a series of projects turning the lakes in the city into more of an economic driver and enhancing the quality of life in the city.

A trail on Lakeshore Drive beside Stone Lake and a nearby kayak launch, along with a boardwalk on the southern edge of Clear Lake, are among the recent water-related enhancements.

Others include the Chessie Trail that begins at Pine Lake, which has long been a major attraction for recreational boating and fishing.

“We want to be the capital of quality of life in Indiana,” said Mayor Tom Dermody.

Dermody said Clear Lake will play a significant role in the ongoing transformation of the city built on manufacturing because of its close proximity to the downtown.

Future plans include a pedestrian bridge over the Norfolk and Southern railroad tracks from Clear Lake to the downtown.

“Between our natural resources, our parks, our trails, we will be the destination for anyone looking to enjoy the great outdoors and live a healthy life,” Dermody said.

City Engineer Nick Minich said the current trail going about one-third of the way around Clear Lake will be extended to form a loop around the body of water.

The trail extension will have a mostly asphalt surface with signs containing information about the history of Clear Lake and the surrounding area once dominated by heavy industry.

He said the loop trail will also be connected to the Chessie Trail which now ends at nearby NewPorte Landing.

Eventually, the Chessie Trail will be extended to the downtown and double back toward Soldiers Memorial Park.

Minich said fishing piers in different spots around Clear Lake and native species planted along the shoreline are included in the project.

Park Department Superintendent Mark Schreiber said Clear Lake has never been as highly regarded as Pine and Stone lakes but that is changing.

The lake was once a source of discharges from Allis Chalmers, which closed in the 1980s, and is too shallow for motor boats.

“It’s just very gratifying to finally see us loving Clear Lake just as much,” he said.

The enhancements would not be possible without a $2.2 million grant from the Healthcare Foundation of LaPorte paying the entire cost.

Maria Fruth, president and CEO of the foundation, said the project reflects the group’s mission of LaPorte County being among the 10 healthiest counties in the state by 2030 from encouraging people to get outside and engage in physical activity.

She said nearly $6.5 million has been awarded by the foundation for similar projects in the city since 2017.

“These investments keep bringing us closer to the goal,” Fruth said.

Check out these amazing secret tunnels built under Liverpool

Biden: We have to act now on climate change

Biden: We have to act now on climate change

Get local news delivered to your inbox!

WATCH NOW: 9/11 float criticized online: 'I think we are a better community than that'

"Talk about a 9/11 memorial that misses by a mile ... in an incredibly disrespectful display, a parade in Porter County, Indiana featured models of the Twin Towers with smoke billowing from each."

A 20-year-old Crown Point woman died unexpectedly Tuesday at her apartment near the campus of Indiana University in Bloomington.

The front of the driver's car was demolished, and a semi wound up on its side, shutting down the highway while investigators and responders worked at the scene.

Teenager dies after Tuesday crash on I-65

Emma Conner, 19, died as a result of blunt force trauma sustained in a three-vehicle crash that closed Interstate 65 Tuesday afternoon, according to the Lake County Coroner's Office.

When a body scanner revealed Christopher Bartosik had a lighter pinned to the inside of pants, police said they noticed he was continually reaching for his eye patch.

Man convicted of killing his grandmother, setting her home on fire

"To press down on the face of someone who loves you with the intent of ending their life — that's no accident," Lake County Deputy Prosecutor Daniel Burke said. "That's murder."

The photos were taken during two thefts, police said.

Mayor Tom Dermody said a trail extension around Clear Lake in LaPorte will add to the appeal of a new boardwalk along the southern edge of the shoreline.

The Rev. Nate Edquist, a member of the Healthcare Foundation of LaPorte, and Mayor Tom Dermody shake hands after the foundation presented the city with a $2.2 check for extension of a trail around Clear Lake.